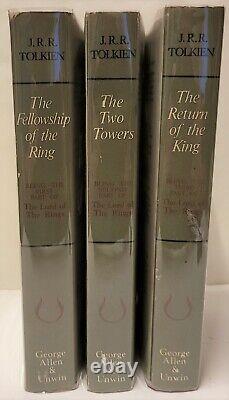 Second edition, 1st printing 1966, with the appropriate publisher corrections to the dust jackets of TT and RotK, making them the true 1st 1966 printing jackets. Return of the King jacket a couple wear spots on the spine, down to the paper thus the white showing, but overall the jackets are as good as to be found for this price. The book spine title gilt is as new, there are some old spotting on Two Towers from former mould. Professor Tolkien requested numerous corrections to the second edition that were never made. He insisted on an immediate reprint which came out 1967.

Thereafter, there were few changes to later printings. The first second edition printings are now in demand due to the scarcity of first editions and fewer finer condition examples like these. Later printings had large print runs so aren't as scrace. The first and second printings of the second edition remain the most valuable. This item is in the category "Books, Comics & Magazines\Antiquarian & Collectable". The seller is "dogfark" and is located in this country: GB.

This item can be shipped worldwide.